Knee replacement surgery can change a patient’s life. Just ask Tony Danninger. “I can stand and walk forever,” says Danninger, a Phoenix resident who works as a lead security screener at Sky Harbor International Airport. “Before my surgeries, I was collapsing sometimes when I would take a step down, because my knees were in such bad shape. Now life is so much better after I sought out the best total knee replacement surgery I could get.”

Danninger had his total knee replacement surgeries a little more than a year apart. First was his left knee, when he underwent a minimally invasive procedure on his right knee. “The technique preserves more of the quadriceps muscle in the thigh,” says Stuart Kozinn, M.D., a nationally acclaimed orthopedic surgeon on staff at Scottsdale Healthcare who performed Danninger’s surgery. “And we used a rotating platform that allows the new knee to bend and rotate, so it may feel more natural in active patients”. According to Dr. Kozinn, “The rotating platform acts like a shock absorber, hopefully offering a longer-lasting knee joint for younger and more active patients who still want to participate in sports such as golf and tennis”. Dr. Kozinn says patients who undergo partial knee replacement experience less stress, typically go home one day after surgery and are often able to use a cane immediately, rather than a walker. “These patients have less pain and become more functional much more quickly and usually don’t have to go to formal physical therapy,” Dr. Kozinn says. Formal physical therapy is usually not required after partial knee replacement by Dr. Kozinn. Another new technology, computer-assisted navigation may help a surgeon in the future properly balance and align the knee. “It’s an emerging technology that is not yet ready for prime time,” Dr. Kozinn says. “But it looks promising in the future as a way to enhance the ability to accurately measure and check the alignment of a patient’s knee.” Much like modern automobiles have computerized check ups- someday we will be able to scan our knees for problems.

“We have used a minimally invasive and quadriceps sparing approach for many years.  When coupled with our rapid recovery program, which includes femoral nerve pain blocks, and immediate full weight bearing, patients are returning to their jobs and athletic activities much sooner.” 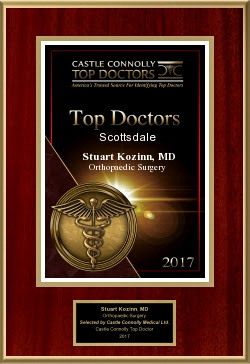