Anterior hip replacement is an extraordinary procedure which is available for patients in Scottsdale, Arizona.  After doing this procedure for the last 7 years in over 1200 total hips, it is my opinion that this procedure does have a few distinct advantages over the older standard of posterior total hip replacement for many patients. While no long term results studies are available that do a double-blinded comparison of techniques, my personal results show that complication rates are generally lower with the anterior hip procedure. The early recovery period with less restrictions is the biggest key to all the subsequent benefits of this procedure. The short term recovery is sometimes hard to believe, and I still find myself amazed at some patients, even after doing many anterior hip replacements. While there can never be any guaranty of success in any particular surgical procedure,  in my experience, most patients’ satisfaction is greater after the anterior hip procedure. A big reason is the  improved, shorter recovery time, along with much less PAIN immediately after surgery. The anterior procedure also has a real benefit in that it carries a minimal of “hip dislocation” precautions post-op.  Patient’s enjoy not having to worry as much about the hip “popping out” ( less than 1%)  which is a more common occurrence in posterior total hip replacement (2-5%).
My personal results also show a lower infection rate (there is better blood supply in front which decreases infection risk, and less muscle necrosis to serve as bacterial fuel).  Also, a smaller incision is used in the anterior hip procedure, and the incisional area has ample soft tissue coverage to protect the deeper joint.  We have seen less problems with blood clots (probably because of faster mobility, and also because of  less twisting of the veins at surgery on the special HANA traction table). There is less leg length inequality because we can “estimate” the hip length better with Xray before closing.  We think this also is an advantage in anterior hip replacement as Xray can usually help in improve the position of most implants. However, even with xray, complications related to placing a wedge shaped implant into soft bone can occur. There may be a slight increase in perioperative fracture rates with this approach, but it is still rare.  Leg length differences can still occur, as the two-dimensional Xray image does not give exact feedback of the three-dimensional reality.  Also, since we are operating in the supine position (lying flat on your back), functional leg length can change  when you stand up. This is because the spine may have a curve in it that “hikes up” one side of the pelvis ( called pelvic obliquity”).  Maybe most importantly to patient safety,  is there is overall  less pain with anterior hip replacement compared to the posterior approach, and less narcotic medications are needed, which results in an overall better feeling after surgery.  Narcotics have many negative side effects including, nausea, itching, constipation, respiratory depression, confusion, lethargy, and decreased mobility. I think that the minimal use of narcotic medications is a huge advance in hip replacement surgery.  LESS PAIN is a very good thing. You may have had one hip done through a posterior approach years ago, which cuts through the gluteus maximus muscle and external rotator muscles as a routine part of the hip exposure. You probably remember how much you stressed and complained about having to follow rigorous precautions to prevent hip dislocation You could not turn on your side in bed, and you could not bend over to pick up your keys if they dropped. The reason that this is necessary in the posterior approach is that the soft tissues are damaged and lax, and the hip can more easily pop out until it heals. Healing time is 3 to 4 months, so you will have to be careful for a long time. In the posterior approach, no traction table is used to dislocate the hip and leverage is used to pop the hip out, stretching veins and vessels. In distinction, the anterior approach leaves the soft tissues intact, which holds the hip in better.

If a ball and socket were held together by gravity and asymmetric muscle tension from intact anterior muscles passing over the joint, the tension might change in different positions. The soft tissue envelope would be come lax in full flexion or full extension due to the shortening of some muscle tissues with those motions. The hip might “fall out” of the socket posteriorly, or it might get “levered out” by a twisting motion. This is why you must not flex (lift) the thigh past 90 degrees to the body while twisting after a posterior hip. You must sleep on your back with a pillow between your legs to keep them apart. The pillow pushed the hips into abduction, which is a more stable position. Crossing the legs (adduction) is strictly prohibited for 3 months! Looking back, I’m amazed at how many people got through that difficult period. This recovery from posterior hip surgery demands a significant period of “no work” and “no travel”. Most patients would choose the anterior approach, given a choice, as this method has a much faster recovery with very little in the way of hip precautions.

The posterior anatomy to the left shows how the short external rotator muscles must be cut in order to open the posterior capsule of the hip and dislocate the hip joint. It takes longer for those muscles to heal back, and the opening that is left increases the risk of dislocation.

Precautions after the anterior hip are minimal. So minimal in fact, that I am sending some motivated patients who qualify home the SAME DAY as surgery, without the worry and concern of hip dislocation. I also do not order physical therapy post op on the anterior hips. One of their functions was to remind the patient not to cross their legs or to bend too far forward. It is possible to pop out an anterior hip, but thankfully it is very rare (about 1 in 200 cases, versus about 6 in 200 posterior hip cases). When we use the special HANA traction table, we “pull” the hip out without cutting the muscles. It then “snaps back” into position at the end of the case with all crossing musculature intact. Like rubber bands that were stretched, they then work to hold the hip in place through a full range of motions. Not only is there less pain but patients can do just about anything they want from a daily function standpoint immediately. Every day I hear stories from my patients about how fast they did this or that activity. Many use the adjectives, “Amazing”,  and “unbelievable” when describing their recovery. Particularly those that have had a posterior total hip in the past on the other side. 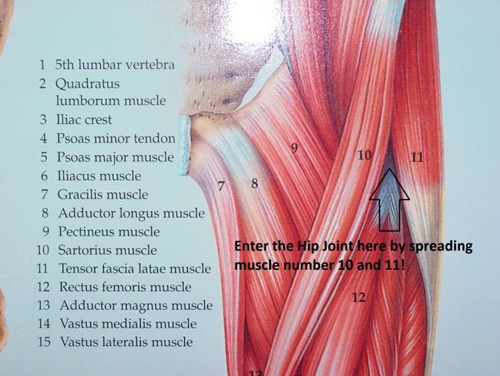 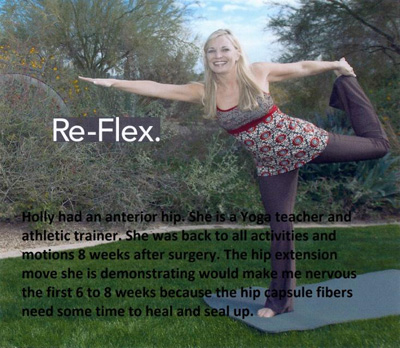 Since the table uses external rotation and extension along with traction to lever the hip out of place, I do tell patients to not purposely do a Yoga “bridge” type motion post-op until the anterior capsule tissue has a chance to heal. The anterior capsule is the only soft tissue cut to get the implants in. The capsule is made up of strong ligaments, that eventually re-grow (it takes about 4 months for the capsule to reform) and heal the hip in even more solidly. The ileofemoral ligament or hip capsule must be cut to get the metal implants into position! So we will tell you to avoid excessive external rotation of the foot (twisting the foot to the outside – like Charlie Chaplin does – along with avoiding hip hyperextension (like when you do a backwards dive off a diving board). It turns out that most activities of daily living have a component of hip flexion (knee up towards head), which is a safe position after anterior total hip because the posterior capsule and muscles are intact – the hip cannot fall out the back that way!

Thankfully, there appears to be minimal nerve pain fibers in the capsule and the bone which is cut. The operation occurs in an inter-nervous plane. No nerves = no pain.  It turns out, most of the pain after posterior THR comes from the cut muscles. So since we don’t cut any muscles with the anterior hip approach, there is much less pain! Remarkably, some patients have no pain at all. I do not prescribe routine physical therapy after the anterior hip. It turns out we used to prescribe PT more to remind patients about dislocation precautions than we did to facilitate recovery. The anterior hip replacement recovers very naturally with walking, simple home exercises and isometrics. We will show you these exercises to do at home before you leave the hospital. I like patients to go to the supermarket, Costco, WalMart or Home Depot and push one of the big carts around the store. That is the best rehab program I have seen for anterior hips! The recover is so fast it is truly amazing.
Now if only we could get a Total Knee to recover as fast as the Anterior Hip Replacement , (PS: we are making some progress with our minimally invasive total knees, combined with multi-modality pain management programs) – that would be really great.